History of online chat and messaging 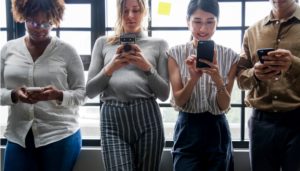 A Brief History about Digital Messaging

Among the many other benefits of the internet, one of the greatest achievements is how it has simplified the way people communicate with each other in different parts of the world. Aside from email, instant messaging has played a crucial role in bringing people of all ages together.

But have you ever wondered where it started? For the past few years, instant messaging has been evolving. This is why it’s hard to identify its origin. Take a close look at the history of digital messaging.

Instant messaging has been around since the early 1990s. However, the concept already started in the mid-1960s. Multi-user operating systems, including the Compatible Time-Sharing System (CTSS), were created at the Computation Center of Massachusetts Institute of Technology in 1961, which allowed up to 30 concurrent users to log in and send messages to each other without fail - a fascinating start for what would soon turn into a world of billions of messages sent daily.

In the 1970s, different programmers worked on protocol, enabling research labs, universities, and other organizations to establish fast and straightforward communication.

In the same year, experts saw an interest in the bulletin board system. This is used to exchange messages, upload, and direct software to a number of users across the connected board in a group environment.

Approximately after two years, Commodore International released the Commodore 64 PC, including an Internet service and Quantum Link. Commonly known as Q-link, Quantum Link was called as America Online in the 90s. However, users paid a fee before they could send messages to others with the support of modem. The receiver could either respond or ignore the messages.

During the 1980s, CompuServe’s CB Simulator was created. This allowed citizens to stimulate band radio via text-based messages or user handles. This is considered the first service designed to online chat.

In 1996, Mirabilis, an Israeli Company, launched ICQ. Called as a text-based messenger, ICQ was the first to reach an extensive market of users over the internet. Unlike the traditional messaging, ICQ was far different and a bit advanced. It allowed for file transfers, multi-user chats, a searchable user directory, etc.

In 1998, America Online acquired Mirabilis and ICQ. After two years, they sold it to Digital Sky Technologies. ICQ’s latest version consists of mobile sync, Facebook integration, and other updates.

Nevertheless, the actual turning point occurred in 1997. This happened when American Online launched AIM. This created a buzz since its availability. AIM caught internet users’ interest and attention. It allowed people to send messages, profiles, or even icons for active engagement.

The rise of AIM resulted in the development of bots, including SmarterChild and StudyBuddy. After 8 years, AIM paved the way. It dominated the market with more than 53 million users. Its popular feature is the chat room.

A year after the creation of AIM, Yahoo launched its version of Messenger. Originally, it was Yahoo! Pager. The features are “IMVironments,” address book integration, custom status messages, a chat room service, and a lot more.

In the same year, Pidgin founded Gaim. It is an open-source instant messaging that allowed internet users to reach contacts on different operating systems. As with AIM, it had a million users in 2007.

Microsoft also released its MSN Messenger. Like other instant messaging applications, it enabled users to exchange messages or email with other people. In 2005, it became “Windows Live Messenger” with additional features. These are social network integration, games, and photo sharing capabilities. After 4 years, the company announced over 330 million users.

Digital Messaging in the 2000s

In the early 2000s, internet users noticed Jabber. As a multi-protocol instant messenger, it acted as a gateway for people to chat with their friends and access the list of their buddies. Aside from AIM, Yahoo, MSN, Jabber.org are the original IM services.

In 2002, Apple developed iChat AV for its operating system. Not only could Mac users integrate their address, but they could also address books. They announced iMessage for Mac OS in 2011. iMessage and iChat were replaced by Messages of OS X Mountain Lion.

Skype also came out on the market. Founded in 2003, it allows users to communicate with others thru video and instant messaging. Though its digital marketing is not as popular as other platforms, it is used by many.

As a digital messaging, Meebo started in2005. It supported Yahoo! Messenger, AIM, MySpaceIM, Google Talk, Windows Live Messenger, and a lot more. After years of support to all these platforms, it was acquired by Google. Plus, Meebo developed versions for Android and iPhone.

Google released Gchat in 2005, that’s available in different applications. It appears in a Gmail user’s window for fast and easy communication. Other services include voice calls, video conferences, and text-based messaging.

In 2006, Myspace developed MySpaceIM. It was an addition to the company’s social platform, and users could message their friends, family members, and other relatives instantly. Later, the service was incorporated with Skype.

In 2008, Facebook released its own version of digital messaging. It was Facebook Chat that helped users message multiple people. After 3 years, the social platform announced the integration of video in chat. Later, it was incorporated into Skype. It also released Facebook Messenger, a mobile app.

With the number of companies that established messaging platforms, the digital messaging industry will not be as convenient and modern as these days. They contributed a lot to the industry, increasing ease of use and hassle-free experience. Thanks to those talented people. Without them, we could not connect with our friends and other followers on social media. We could not update them in real time, too.

It’s even harder to imagine living in a place without emoticons. Our way of communication has come a long way, and the question now is what kind of possible instant messaging trend in the near future. Perhaps, it would be more different, effective, comfortable, easy, and exciting.