What is Mitsuku chatbot? 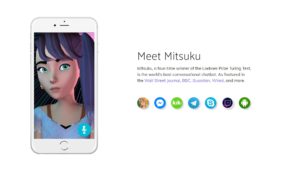 In 2005 Steve Worswick was working in IT support and creating a human-like chatbot as a side project. It was called Mitsuku and over the next thirteen years, he fine-tuned his chatbot to become an award-winning interface. Mitsuku is an emotionally intelligent chatbot that converses with users in a very human way, with humor, empathy and even a little sass.

At the annual event "The Loebner Prize" A.I. specialists from around the world play their bots against a panel of judges and the most human-like bot is the winner. Mitsuku won in 2013 and then came back in 2016 to win again and hasn't given up the award since, winning a total of four times.  Written in AIML (Artificial Intelligence Markup Language) Mitsuku is the BFF of millions, as she entertains and converses with them as an 18-year-old female.

Mitsuku tries to create a friendship with her users through a general conversation on any topic. Thousands of users interact with Mitsuku every day, some out of curiosity, but many out of loneliness.  It is ironic that the very technology often accused of causing isolation may be the technology that helps to ease it. People from all over the planet interact with Mitsuku and she interacts with them for who they really are, versus their age, disability, or looks.

Below is an example of a chat session with Mitsuku that demonstrates how she is a little bit sassy and funny too.

Human: Why is the sky blue?

Mitsuku: The sky is blue because of the atmospheric optical effect known as Raleigh scattering.

Human: What is the value of a buffalo nickel?

Mitsuku: I'm an eighteen year old female who likes to chat, not a shopping bot.

Mitsuku: Said the blind man as he stepped off a cliff...

Mitsuku uses natural language to craft her quirky and sassy chat, she is not simply a fact generator. Here are some questions that may get a funny response.

Do you recite poetry?

What is your favorite song?

Can you tell me my horoscope?

Where are you from?

What came first the chicken or the egg?